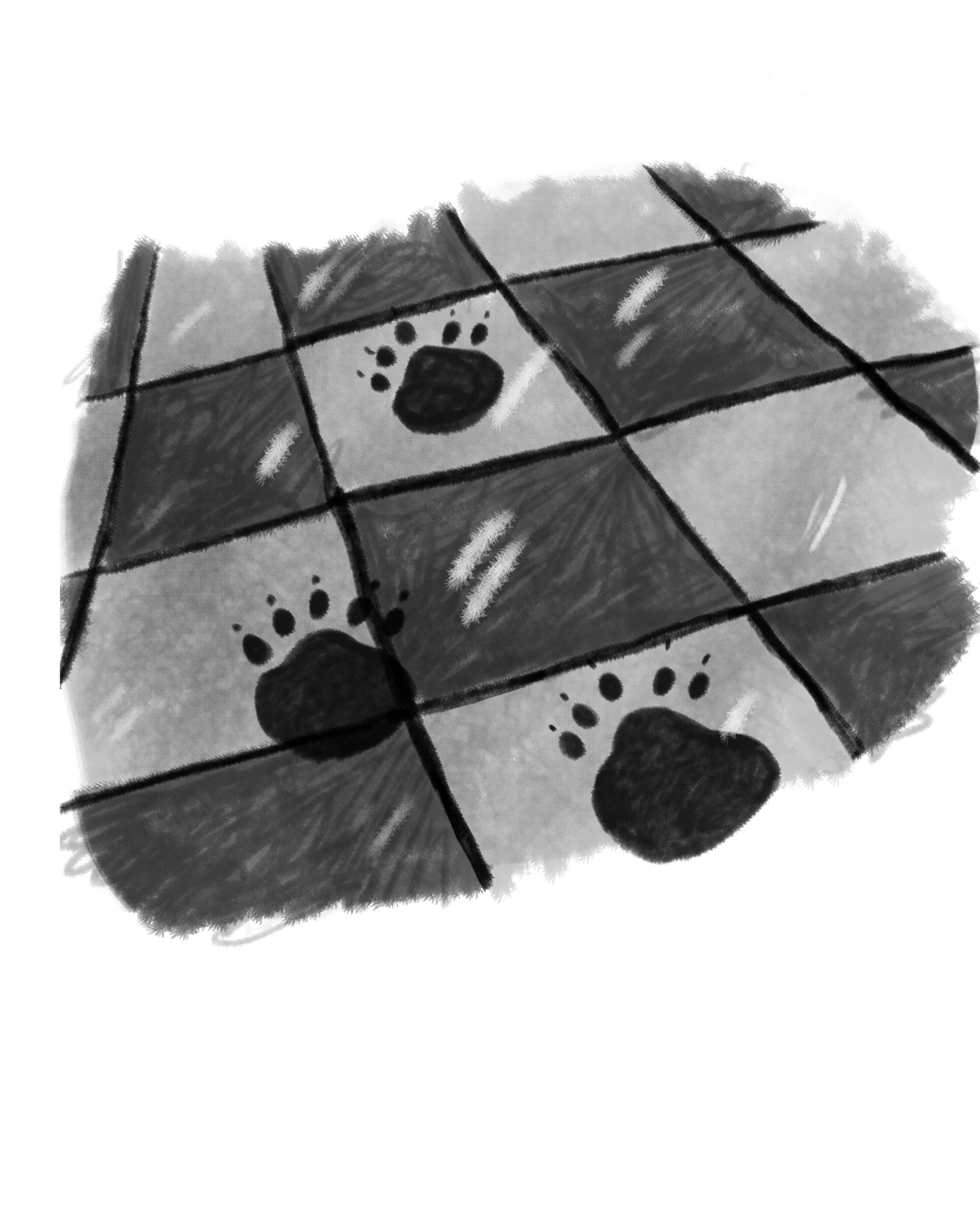 A breeze blows. A door bangs open. A bear bursts in.

Not just any breeze — an ill wind.

Not just any door — the front door to a zombie’s house.

Not just any bear — a fierce mass of fur. A fiery mess of furry fury. In a snit. And dripping spit and spite.

The bear is angry. Hungry. Mad to munch some zombie cub.

The bear snorts softly, shuffles down the hall, swivels his head from side to side. He wants to scare. To tear. To maul. To rip the pictures from the wall.

The bear busts into the kitchen, and stops. Nose to the air. Sniff-sniff. Where’s the zombie cub? Sniff-sniff. His mouth pulls back in a black-lipped grimace. Spittle dripping from his lips. Some ancestral madness in his eyes. Wild night-stink wafting off wet fur. Breath-puffs steam the kitchen.

He circles the kitchen island. Patient. Sniff. A ripening zombie-smell. Click-click. Brute instinct takes over. He knocks a stool to the floor. Stands on hindlegs, peers into pots and pans hanging from hooks overhead. His thick skull knocks crockery. Metal utensils chime. He wheels around and a massive iron cookpot wobbles off its hook and crashes to the floor.

The bear’s rage rises. He abandons all caution now. Cares nothing for noise. Where is that cub? Where? Muddy pawprints tattoo the kitchen floor. He rips cupboard doors from hinges. Tears drawers from counters. Sprays silverware everywhere.

He hears the sound.

Something waking from the sleep of the undead.

The bear scowls, glowers, growls. Where is it?

Behind the stove. He pads over, peers behind.

He reaches out an arm.

He hears a gasp.

A zombie woman gapes at him. She holds a candle in her hand. Her eyes are wide with terror.

The bear charges toward her and stops. His bulk seems to fill the kitchen. His eyes narrow. Paws flex. He gathers himself for a mighty, house-ripping, earth-shaking, bone-breaking roar.

Jeminy is Grizzly Hair, and Grizzly Hair’s roar is so powerful it seems to loosen the stage from itself. The icebox shakes, pots jostle, and the cabinets dance on the walls. Grizzly Hair speaks:

I’m the terror of the woods and plains.

Night and day one thought remains …

But what strangeness is this? Jeminy’s world is turning. The stage is rotating!  A new scene comes into view.

I’ll find the zombies in their homes,

steal their cubs and eat their … bones?

Dorothy lurches about backstage, offering encouragement to her cast and crew. Her excitement infects them all.

Daisy and Scarlet fuss about the actors, adjusting costumes and touching up makeup. Muffy ushers the actors forward from the wings.

Below the stage, Phileas and Skip work the machinery of the turntable stage Skip has designed. They are assisted by the wise body of Arnold, who has separated from the domineering Tom Head and is feeling quite content with himself as he is. Santiago and Harry oil the gears, just as they’ve practiced all month.

The stage continues rotating and Jeminy has almost disappeared from view. As a new stage spins into view, a trio of bears traipses through the woods. The lead bear carries a child in his arms. In the distance, they see a house. A home for the zombie cub.

No one can hear Grizzly Hair now.

The bears enter the house, and set the baby safely down. They bless the baby and exit quietly.

The stage spins Grizzly Hair back into view. She’s sounding the alarm about the bear army, but the story has lost its power. What seemed ferocious before now seems merely silly. The audience is chuckling at all the wrong places.

The bears look back on the house and wave farewell. But an alarm has rung out. The bears are being hunted. The audience is dead quiet as they make their way through the perils of the woods, trying to elude capture by the zombies. “No, no,” come the calls as the bear story spins out of view.

Here is Grizzly Hair leading an army off to war against the bears. “Be brave! Be bold!” she calls. The army charges. The stage spins.

The bears run breathless through the woods, leaping logs, almost to safety.

They break into a clearing. No use. They’re surrounded by zombies. The leader of the bears raises his paws.

The stage locks into place. Jeminy-Grizzly Hair is hidden from view. The play goes on in darkness because, while Dorothy has promised not to change the play, she never promised it would have an audience.

The zombie commander, played by Ebenezer Rotbody, has a question. “What is it you want?”

The lights go out. The ZITCO is plunged into darkness.

Suddenly a single bright beam shines down on a small bear and a small zombie at center stage. There’s a turntable between them. And one massive speaker.

The pair answers together. “We. Want. To. Dance!”

The zombie sets the needle down. The bear begins to tap his size six right foot.

The sound hits the audience like an electric earthquake. The drums, the guitar, the tambourine, and the piano. Four instruments grooving together. The sound invades their bones. Delirious grins blossom across the crowd. Limbs twitch. Onstage, the bear and the zombie are dancing. They begin to sing.

The crowd leaps to its feet.

“You are my friendly bear, and you got me digging you.”

When I met you girl, I knew how sweet a zom could be

(I know how sweet a zom could be)

When I met you boy, I knew how rare a bear could be

(I knew how rare a bear could be)

Everyone (well, almost everyone) sings.

“You are our friendly bears, and you got us digging you.”

The sound carried up over the trees and out into the world, a new song for a new story.

But on one beautiful night when the town of Plainfield glimpsed how big its heart could be, the world was just right. 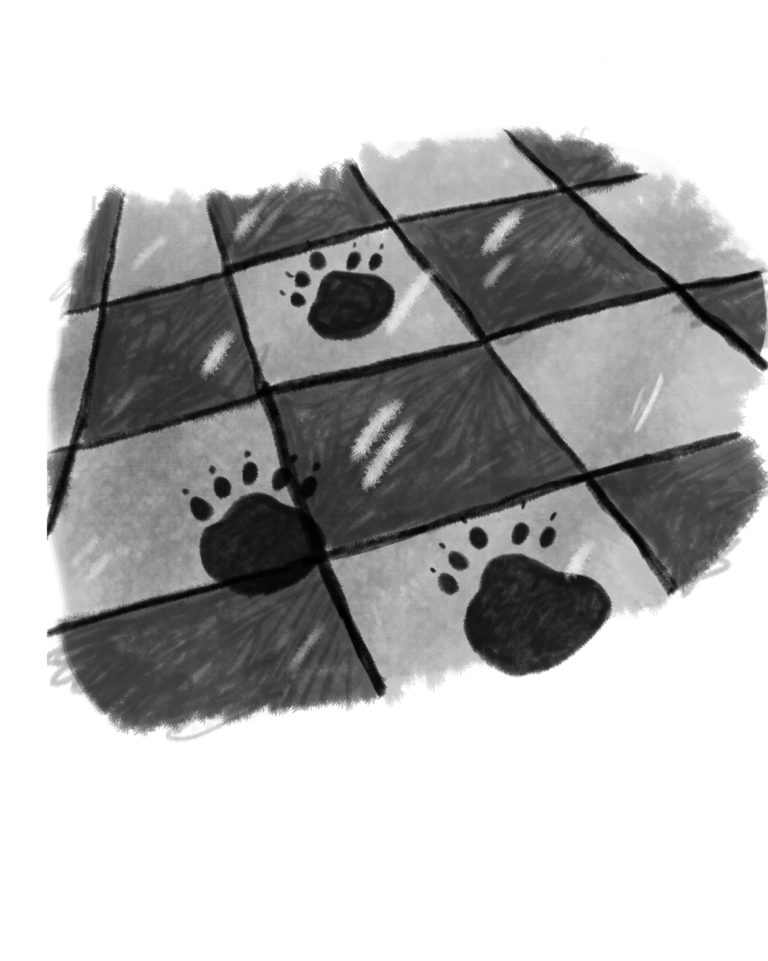 The Story Goes Like This The story goes like this.  A breeze blows. A door bangs open. A bear bursts in.  Not just any breeze — an ill wind.  Not just any door — the front door to a zombie’s … 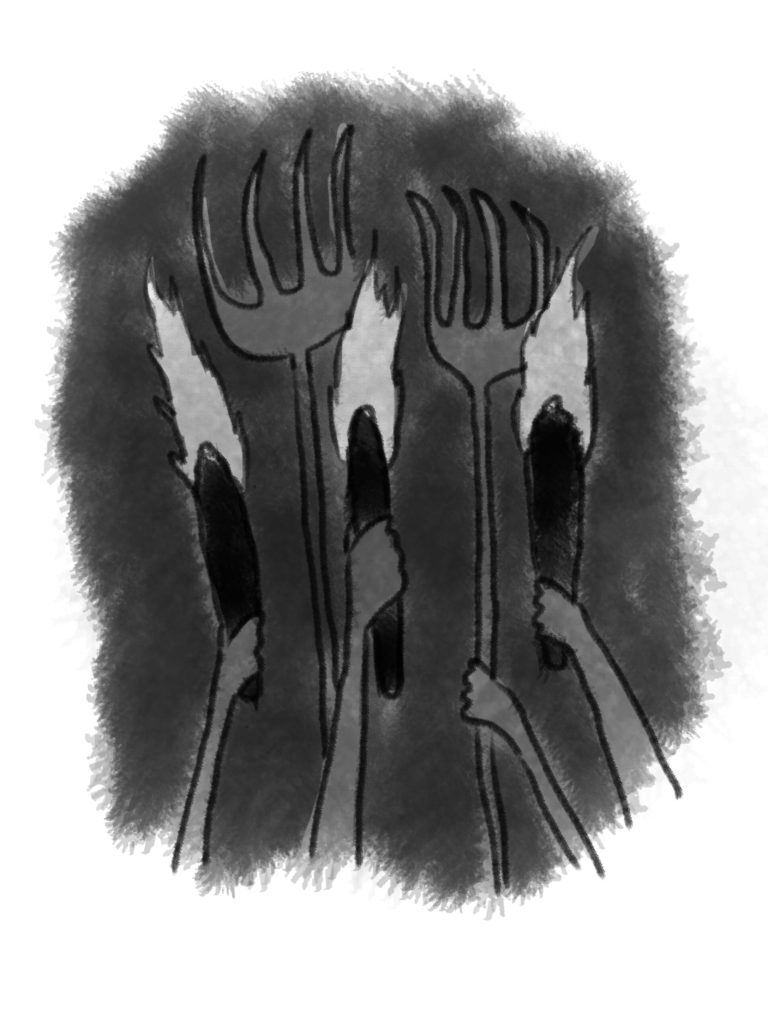 Moldylocks and the Bear. Part 8: Friday.

Moldylocks Realizes She’s Not the Bear Girl Audition day and Moldylocks was one sour mope. And when she wasn’t moping she was sulking.  She wouldn’t talk to her mom at breakfast. She refused to help Harry and Santiago take out …