Scar and the Wolf, Chapter 13

Chapter 13. What Do You Wish For When You Have Everything?

All that remained of Barnaby were two chewed-up boas and a trail of feathers quickly being blown into the night.

“I’ll go!” yelled Chunk Sr. “Spasm, Retch, come with me. Everybody else go inside.”

“Just let him go,” said Grandma as the other zombies streamed into her house. “He won’t be back. We’re safe.”

“Okay, boys,” yelled Grandma to the men. “Go get him! Just be back in time for braincake!”

High on the rooftop of Grandma’s house, in the dry lee of the chimney, one creature observed the scene. He committed everything to his flawless memory. Once everyone had either gone inside or taken off in fruitless pursuit of Barnaby, he twitched his two sets of whiskers and shook the rain off his two heads. With a twitch of his right ear, the brass tag jangled softly. The thunder tumbled and he disappeared into the night.

Inside, every zombie stripped off their soaked coats. Grandma built up the fire in the kitchen and Scarlet stoked the one in the front room. Together, they strung a clothesline in a zigzag through all the downstairs rooms. Soon, coats and cloaks (and a feather boa or two) hung in steaming curtains. Zombies walked around in their long johns, union suits, T-shirts, and tighty-whiteys, chatting and laughing at themselves, and sipping hot mugs of Earl Gray matter tea.

Grandma and Scarlet lurched into action, delivering trays of gut jerky, bowls of skin beetles, and containers of skin spackle for suppurating sores and scabbed skin.

The posse of wolf-hunters and perimeter-securers soon returned and got into the spirit of the party. Dr. Sigmund kissed Daisy. “We didn’t get too far,” he winked. “That braincake was too tempting.”

Scarlet, returning from the kitchen with a massive tray of sliced, raw mondo-haggis, paused to look around Grandma’s living room. For the first time in her undeath, she felt like she was seeing zombies for who they were, not what they were wearing. The zombies she saw were kind, surly, funny, boring, irascible, stubborn, joyous, and for the most part, a mix of all of those things and more.

The party kaleidoscoped into an array of colorful mini-conversations. Scarlet listened as she circulated with the haggis.

Chunk Sr. talking to Phileas Batuta and Tom Femur. “It was the strangest thing. The entire boa stall was just packed up and gone. …”

Old Lady Poxball talking cooking with Chunk Grissom Sr. “Now, to get the best jerky, you gotta leave it in the smokehouse for a week … ” And Chunk Sr. replying, “Have you ever tried your jerky in a haggis?”

Tug Singlebuttok insisting to Kay Hamhock that he wasn’t crazy. He really had seen lights in the sky. “It looked like a giant house. You gotta believe me. … ”

Mr. Sever, Scarlet’s science teacher, explaining to Constable Cruft: “I’m telling you, the kids have been bringing in some strange creatures from the woods. Snakes with feet. Possums with extra pairs of hands. Archie Dunphee even said he saw a rat the other day with two heads. I’m telling you, it’s not natural.”

Daisy assuring Lyudmila Gallows that “property values are going to go up even more this year. … ”

Anka Mastiff, the fortune-teller, asking Phylidia Phartball what she knew of circuses.

Dorothy J. LaMort! (the exclamation point was part of her name), standing beside the piano, having a serious conversation with One Tuckerson and his younger brothers, Two and Three. “Have you boys done any musical theater? You’d be great in my next production.”

Spasm Jenkins, Retch Lardbelly, and Carl Nugget leaned together in a corner speculating about the wolf’s whereabouts.

And for the moment, the younger zombies had forgotten their tribes. They were all just undead kids laughing and telling stories. Jeminy caught Scarlet’s eye and gave her a subtle nod.

Grandma Bone swept past and took the empty haggis tray from Scarlet.

A throat cleared behind her.

Scarlet beamed. “I didn’t get a chance to thank you. You make a good missile.”

Moldylocks shrugged. “I like a good scrap. Plus, I owed you.”

Moldylocks reached into her pocket and handed Scarlet the jar of snackin’ slugs. It was empty. She hugged Moldylocks. “Thanks for coming to my party,” she whispered.

“Thanks for being my friend or whatever,” muttered Moldylocks.

Just before Scarlet returned to the kitchen, she felt a hand on her shoulder.

“Nice going, Scarlet. You did the right thing today.”

Scarlet looked at the hand. It was held by another hand.

Carl! And he was wearing the same shirt.

Scarlet thanked him for his help at the market. “And by the way,” she said. “I love your shirt.”

The moment Scarlet returned to the kitchen, Grandma Bone looked up from a notepad she was scribbling in. “Go have fun. It’s YOUR party, Braindrop.”

“Just tell me how Pokey and Sniffy are doing!” laughed Scarlet.

Grandma Bone gestured to a straw-filled box set next to the stove. Sniffy was cuddled into Pokey’s protective palm. Both were warm and sleeping soundly, despite the hubbub around them.

Scarlet skedaddled back to the front room to relax at last.

A tink-tink-tink sound rang through the house as Dr. Sigmund tapped his jaw against his tea mug.

He was met by baffled silence.

Daisy nudged him. “Honey,” she hissed, “your jaw.”

“Unnh. Nnnh.” Dr. Sigmund put his jaw in. Click-CLACK. “Attention everyone, I’d like to sing Happy Unearthday to Scarlet — the most grown-up girl I know.”

After Plainfield had sung to her, Grandma Bone held a cake, bright with candles, before Scarlet.

Scarlet looked at the happy bedraggled zombies all around her and for a moment, didn’t know what to wish for. She had everything she needed. Moldylocks elbowed in front of Tom Femur, saying to him, “Stop squishing me!”

Scarlet looked at her bear-loving friend and she knew. 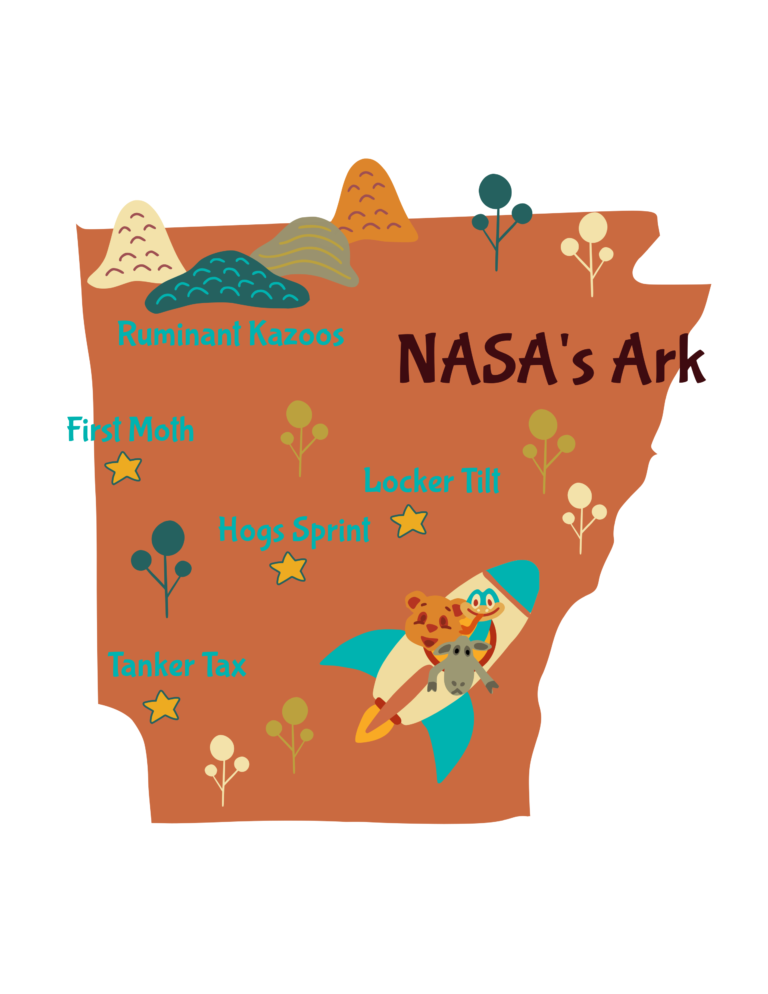